The Hobbit: The Desolation of Smaug is Playing in Theaters

Email ThisBlogThis!Share to TwitterShare to FacebookShare to Pinterest
Labels: The Hobbit: The Desolation of Smaug; roundtable with Orlando Bloom 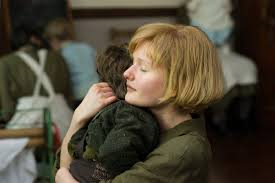 Philomena hugs her son.
DP: Do you think that Judi Dench’s older Philomena is consistent with the young Philomena that you play?  Do you see a believable transition?
SKC: I can almost watch the movie objectively because I don’t look at the young Philomena and recognize me. I have a different accent, and I’ve never had short hair.  So I look and sound completely different and I am playing Philomena with a certain naiveté, and when I see Judi’s style and her face shape and that she also plays Philomena with a certain naiveté, I think the transition goes nicely. I’d like to think it does.
Q: When first seeing the film, were you so pleased that you were able to translate the character that you didn’t worry people may think you are not glamorous?
SKC: Ultimately, my job as an actor is to be a chameleon, and I feel the only healthy relationship an audience member has with me as an actor is believing I am my character. I felt that the way I appeared in the film did justice to the situation that Philomena went through and to everything that this film teaches people.  That Philomena felt I was doing a good job for her was at the forefront of my mind.   I know that she has seen the film four times now and absolutely loves it. She’s very pleased with both Judi and me, which is very important to both of us.
Q: Did you talk to Judi Dench about playing a younger version of the woman she was playing?
SKC: I actually made the decision not to speak to Judi.  It was not because I haven’t wanted to speak to her forever and always, because she’s amazing.  I decided it was best not to speak to her–and Stephen Frears felt strongly about this, too–because she plays Philomena at a stage in her life where she has been so shaped by what happened to her,  whereas I play her at a point where she’s very raw and naïve. Those girls in the convents didn’t know anything. They didn’t have access to any kind of information, so what they were told they believed. The only person that I felt could really give me the information that I needed was the real Philomena. So I made the journey to her house in London to meet her, and she very kindly invited me inside for a cup of tea.  It was difficult because I knew I was going to be asking her incredibly personal questions. I was meeting someone in her eighties who had been through an incredibly tragic circumstance, so I was nervous speaking to her about it.  But she was so open and lovely and accommodated all of my questions very, very honestly. It was quite emotional because what happened still makes her well up. She still goes over this situation every day in her mind.  I was asking her about certain types of situations with the nuns and her relationships with them, asking, “Why didn’t you just run away?”  Because these days, kids fight back.  She was like, “Don’t you worry, I’ll put in a good word for you with The Man Upstairs.”  I was like, ” You’ll what? You’re still talking to Him?”  She was like, “Yeah, He owes me one.”   I was like, “He owes you one?  I’d say He owes you quite a few!” It was amazing to realize that this woman still has a sense of humor, because through religion she found forgiveness–and if we can find forgiveness in any realm of our lives, we can go on living.  That’s why I feel that in addition to telling Philomena’s story and the [harsh] truth, comedy is so important because that’s who she is, too.
Q: Why do you think she was able to walk away from what happened and not be totally scarred or damned by it?
SKC: Philomena’s faith wavered for a long time. She said that she always still prayed, always had faith, but she started to heavily question some of the lessons she’d been taught and the reasons behind some people’s behavior. Her “therapy” came from her becoming a psychiatric nurse and speaking to many other people who had gone through equally terrible things.  She realized that it was not her faith that was the problem. What had happened was the problem, and that didn’t mean she should lose her faith.  What happened to her in the convent didn’t cause her to demonize religion. You’ve got to give it to the woman to be able to find goodness.  The “religion” she experienced was awful, but as a psychiatric nurse she got to understand psychology, and I think for her that was very important.  Philomena is an incredibly strong-willed woman. She and Judi Dench, two women I’m completely in awe of, taught me things that I’ll try to have for the rest of my life.
Q: Did you look at pictures of her as well, when she was your age?
SKC: She was in a convent when she’s like 18, 19; it’s completely mind-boggling. I’ve seen one or two pictures. The picture of Anthony as a two-year-old! When you see that little face and know the story, I defy you not to weep. 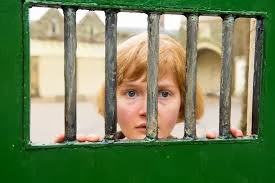 DP: Philomena left the convent and eventually married and had a daughter.  We learn in the movie, in a scene with Judi Dench, that the young Philomena enjoyed the sexual encounter that led to Anthony’s birth.  I doubt if you asked her this, but do you think Philomena had premarital sex again?
SKC: I think she probably did.  She said the sexual experience she had at the fairgrounds was the most amazing thing, like with a knight… 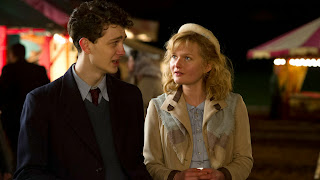 DP:  But she was always told by her parents and the nuns that she had sinned, and she believed that.
SKC: Maybe when she was getting married again, she looked back and said it wasn’t a sin.  You can rationalize it more when you’re slightly older and you’ve lived a life, as opposed to when you’re a child and have no access to any kind of information, and have no family to tell you otherwise. You believe what you’re told. Once these girls, who have no families and no money, are stripped of the title of Mother, they don’t have anything. I think when they move on and meet other people, they will try to block all that out.  So I can’t say for sure, but I believe she would have had sex again before marrying.
Q: Have you had experience with nuns?
SKC: My experience with nuns is very minimal, although my sister went to a Catholic school for a while.  I’m Protestant; my mother is Protestant, my father is not so religious.  My mother’s always dragged my brother, sister, father and me to church every Christmas. She a practicing Christian and there’s nothing wrong with that, but I just don’t particularly want to go to church.  We all had to go, wherever were in the world.  Now my father seesPhilomena as his opportunity not to go. He does send me texts now and again, still seething he is at the Catholic Church. But I feel this is just to get out of going to church with my mother.  He says, “I’ve seen that film Sophie did. I’m not going anymore!  She’s like, “We’re not even Catholic!” I’m now used as a scapegoat! I think this film brings to life a very extreme side of religion. My sister’s experience with nuns was not like Philomena’s, but it was atrocious.  She won’t be very happy to read what I’ve said. Oh dear, she just got married, so she’ll have my guts for garters, I swear!
Q: Will your parents see Nymphomaniac?
SKC: I’m sure they will. I think they’re curious, like the rest of the world, after seeing all those little snippets they keep on releasing.  They are something I didn’t really want to ever discuss with my parents, to be honest. I don’t know if you’ve ever discussed your orgasm with your parents, but I certainly haven’t.
Q: You’re also going to be in Brad Anderson’s Eliza Graves.
SKC: I made that in the summer.  It’s also wonderfully different.  I’ve been very lucky that it’s been a really diverse year. I’m doing a bit of repetition though, only doing movies with Sirs and Dames. Eliza Graves has got Sir Ben Kingsley and Sir Michael Caine in it. along with Kate Beckinsale, Jim Sturgess, two fine, fine British actors. Getting to work opposite Sir Ben Kingsley was astonishing  It has a real corker of a script and is wonderfully fantastical in that Edgar Allan Poe way.  It was a lot of fun being the ultimate weirdo that is within us all.  She’s a lunatic.  It wasn’t much of a stretch!