Hello I Must Be Going is Playing in Theaters 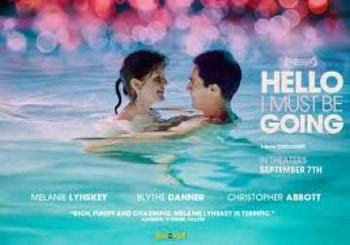 You probably recognize the title of Todd Louiso's Hello I Must Be Going as the title of the hilarious Groucho Marx song in Animal Crackers. Louiso's sweet serio-comic third film, with a debut script by his wife Sara Koskoff, actually bears no resemblance to any of the anarchic Marx Brothers comedy classics, but surely by watching them the unhappy conformist protagonist Amy Minsky, played by Melanie Lynskey, is inspired to rebel. Lynskey seems to grasp Amy's need to break away from conventions and expectations because that's pretty much what she has done herself in playing Amy. I've been among those waiting for her to get another memorable staring role since 1994. That's when the 16-year-old New Zealand native and young Kate Winslet received accolades playing real-life murderesses in Peter Jackson's Heavenly Creatures. Lynskey temporarily went back to school--while Winslet went on to superstardom. She returned to acting and has for the most part quietly played supporting parts, including a recurring role on Two and a Half Men, but it's way past time for this talented actress to move into the spotlight. Now she gets her long-awaited chance and will capture hearts as a broken 35-year-old who is vegetating at the Westport home of her well-off parents Ruth and Stan (strong performances by Blythe Danner and John Rubenstein, with a phone in the photo). She is doing a lousy job of recovering from her split from her husband David (Dan Futterman), for whom she had dropped out of grad school and pursuing a career in photography to marry. She comes back to life when she falls for Jeremy (Christopher Abbott of HBO's Girls), a 19-year-old actor whose mother assumes is gay. But this relationship threatens her businessman's father's chance to close a deal (with Jeremy's step-dad) that will finally allow him to retire and travel the world with his long-patient wife. The film opens this Friday in New York and I hope you see it for Lynskey-and the excellent cast--and also because you'll be discussing it afterward. In anticipation of its September 7 premiere in NY and LA, I had the opportunity to discuss it with the personable Louiso and Koskoff, who met when they acted together on television. 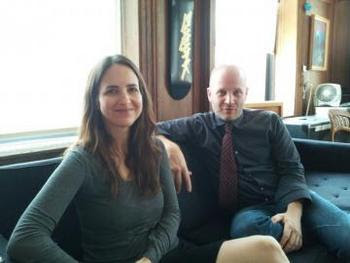 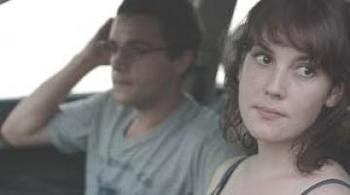 Abbott and Lynskey
DP: It validates Jeremy as a good, unselfish guy.
SK: In a simple way, I think.
TL: He pays attention to her, which is different from her experiences in relationships.
DP: You have said elsewhere that Jeremy is the first person who is genuinely interested in Amy. For the first time she's the star in her life.
TL: Right. There's a scene when they're driving around town and he's asking her questions, and she becomes very uncomfortable because he's not used to someone wanting to know anything about her. It's almost as if she wants to distract him so he'll stop asking the questions. She says, "Why am I telling you all this, it's very uninteresting." But he says he is asking questions because he is interested.
DP: So are they the perfect couple? Or, in terms of writing this movie, is their relationship a rite of passage that each needs to go through to move forward?
SK: I think they are kind of a perfect couple. That's what I find sad. They're not going to be together because of circumstances--sometimes things don't work out. [To Todd] What do you think?
TL: I think so in terms of how great it is that they can let each other go, because they see it's important to the other person--that's how much they love them.
DP: Why does Amy take photographs of rivers and water? Is it sexual and is it through Jeremy she has a sexual awakening and is ready to take photos again?
SK: It's quite a bit. The images are dense and every time I try to unpack one it sort of feels less interesting than just the full image.
DP: Rivers flow off into the distance and that's similar to what Amy might eventually do.
SK: "You can't step into the same river twice." I can throw that one out there.
TL: We talked about her images, visually, at the beginning of the film. The photographs were very clear but the further she went into her head the cloudier they became, until she lost her focus. She speaks about this in the car ride with Jeremy, when she explains why she didn't finish her visual thesis. At that time, when she was in grad school, she was being taken over by her relationship with David. That was obliterating her eye as an artist and making everything out of focus. You can see that in the slide show she shares with Jeremy. Things start out very clear but when she gets closer to some rocks underwater everything is really out of focus.
SPOILER ALERTDP: And when she travels to Europe at the end, will they be back in focus?
SK: Her mother will be in them and there will be a kind of integration in her photographs. She will be integrating something personal into her cerebral aesthetic. That's her first step to moving forward as an artist.
END SPOILER ALERTDP: Talk about Amy's carelessness, how she's repeatedly caught doing stuff in public.
TL: That's Groucho Marx really.
SK: Yeah, I think so, too. She's trying to shake things up, unconsciously. She's caught between these two worlds. She is careless. That's part of her being. Spilling a milkshake all over herself. She's always just fucking everything up.
TL: That's how she was in her marriage. She was trying to act like a different person.
SK: Like her mother.
DP: Do you think Amy has always wrongly seen the marriage of his parents as the model for good marriages?
SK: I do.
TL: Yes, thats what she is striving for but can't make it work. Then she realizes that it's not what she wants.
DP: She never realized that her mother has actually been as unhappy in her marriage to Stan as she was in her marriage to David.
SK: Yeah, she would have done the same things as her mother probably. But now she can then step outside of the pattern of wanting what she thought her mother had.
DP: The pattern she speaks to David about is how she was content being unhappy in their marriage.
SK: She was comfortable in being unhappy.
TL: It's what she knew.
SK: Sometimes its more comfortable to be miserable than to change, because its familiar.
DP: Why didn't she and David have kids? Did she have an instinct not to have kids with him?
TL: Toward the beginning it's mentioned that she had a miscarriage but its kind of off-camera. So they were trying to have kids. I don't think it was a major issue for her, which is why it isn't talked about in the film. It's just a layer, a formality for the actors to work with that I think helped them. If the audience catches it, it's another thing...which is great.
DP: David seems so much worse than Amy's father. Stan is so low-keyed and less dramatic than anyone else, but he's among the most important characters in the film.
SK: He's pivotal. 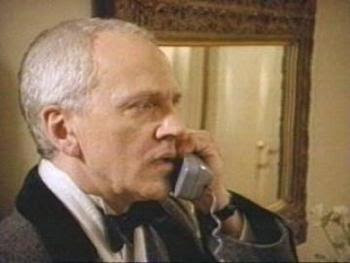 John Rubenstein
SPOILER ALERT
DP: He's supposedly the nicest, most considerate person but he turns out to be probably the worst. He does invite Amy to stay in the house to prevent intimacy between him and his wife. Is that accurate?
SK: I think that's one of several ways to look at it. He's stuck in past-pattern with his daughter. She is kind of a buffer.
TL: He doesn't know he's acting out in a certain way. He doesn't know the effect he has, it's unconscious.
DP: I think he does.
TL: Really?
DP: He walks out the door at the end, when Amy really needs him. He can finally act as he really is because his intentions are no longer secret.
TL: I think he's incapable by that point. He has been revealed.
END SPOILER ALERTDP: Did you know the ending before you wrote the script?
SK: No, it ended differently in the first pass, but similarly tonally.
TL: Amy's finally able see clearly what her parents marriage is and see her connection to her mother in her own marriage to David. It's not just that she dodges a major bullet, she's also able to step the other way and change.
SK: It's funny because I kept moving scenes around. That scene in which she thanks David for ending their marriage is a step along the way to seeing her parents clearly. Finding the compassion that she feels for her mother is a breakthrough for her, and helps her move on.
DP: Could you have ended this movie unhappily?
TL: No, no, it had to be this way...for me.
*Sarah Karkoff statement: "When I told Todd Louiso, my husband and the director of Hello I Must Be Going, that I was going to write a script for him to direct about a woman who gets divorced and has an affair with someone much younger than herself, he wasn't happy. I went ahead and wrote it anyway. Thus began our first collaboration as writer and director, respectively, with my radical act of rebellion. I had to ignore him. He was suffering a loss of heart, just like Amy Minsky, the lead character...And like Amy, he wasn't thinking clearly. Somewhere along the way, he'd disconnected from himself and his love for his work. But I hadn't. We had a family to support, by God! We would go back to the beginning, I decided, to what we both loved: to simple and truthful story-telling, the power of connected and committed actors, beautiful and rich photograph, grounded and expressive language, and the more-than-occasional pratfall. Making the film became a regenerative process as much as a story about personal regeneration."
Posted by Danny Peary at 8:57 AM 3 comments:

Email ThisBlogThis!Share to TwitterShare to FacebookShare to Pinterest
Labels: Hello I Must Be Going, one on two, Todd Louiso and Sarah Koskoff
Newer Posts Older Posts Home
Subscribe to: Posts (Atom)